In the 18 years between 2010 and the start of national cancer registration in 1994, the number of invasive cancer cases diagnosed each year has risen by 53%, about 3% a year.

For some cancers the rate of increase has been even greater: prostate cancer cases have increased almost threefold, from 1,096 to 2,998 a year; melanoma and hepatobiliary cancer by 120%; and breast cancer by 70%. Much of the overall increase in numbers has been due to demographic change, and the increases in age-adjusted incidence rate have been more modest – 13% overall, about 0.8% a year.

Extrapolation of the current trends in incidence suggests that the number of invasive cancers will rise to about 38,000 by 2020 and to about 55,000 by 2030, with obvious implications for services. Most of this increase will be due to demographic change.

Cancer mortality rates have been declining since about 1980, although at a slower rate than overall mortality. This, as well as the ageing of the population, means that cancer deaths are making up an increasing proportion of all deaths (see Figure 1).2

Prostate cancer incidence in Ireland ranked highest of all 30 European countries and was over 60% higher than the EU average. The high incidence rate in Ireland is almost certainly due to the very large increase in PSA testing here in recent years.

Recent figures on smoking rates across Europe have shown Irish females to be ranked sixth highest and males 22nd highest of the 25 EU countries –rankings very similar to the lung cancer incidence.4

The comparatively high incidence rate in Ireland may be linked to the development of organised screening here in recent years.

Cancer survival has improved significantly since 1994 for both males and females (see Figure 2). Survival at five years after diagnosis has increased from 39% for males diagnosed in 1994-1997 to 55% for those diagnosed in 2005-2008. 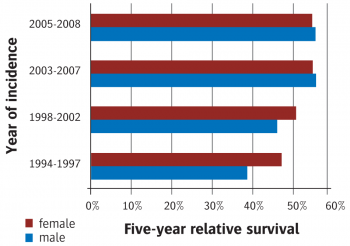 Figure 2. Five-year relative survival by sex and year of incidence(click to enlarge)

Figure 3. Five-year relative survival by site and year of incidence

However, despite the overall improvement in survival in Ireland, figures published this year by the OECD showed that, of 20 developed countries studied, Ireland had the poorest survival for cervical cancer.

It is not clear if the OECD data is fully comparable between countries and more definitive figures on survival will be produced by the EUROCARE 4 collaboration in 2012.

A number of projects are currently underway in Europe to examine possible reasons for the large international differences in survival.

With an expected doubling in incident cases in the next 20 years and the continuing increase in overall survival, we can expect a very large increase in the number of cancer survivorsCentral Statistics Office. Vital Statistics. Fourth Quarter and yearly Summary 2010, Stationery Office, Dublin 2011.