This study indicates that there was a dramatic increase in referrals to the Phoenix Care Centre in the year 2015 compared to 2014. The results show a higher rate of referrals of males than of females to the centre (males: n = 45 and females: n = 22). 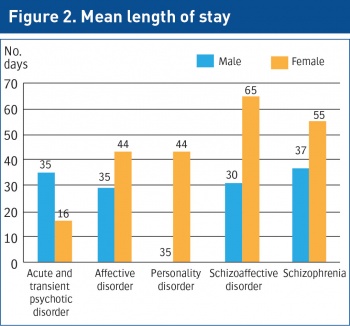 Physical assault was the most significant indication for referral in both males (48.9%) and females (40.9%).Sexual assault and those with a history of absconding were less common (see Figures 5 & 6).

The mean stay for females with a diagnosis of schizo-affective disorder (n = 65 days) was higher compared to other stated disorders. Comparatively, males diagnosed with schizophrenia disorder had a shorter period of admission (n = 37 days ) as they responded quicker to psychotropic medication (see Figure 2).

A weakness with this study is that concerns expressed in the referral letters may not have reflected what was actually found on assessment. Patients who were stated to have an allergy to a second generation antipsychotic were found to have a better response to the particular second generation antipsychotic rather than what was indicated to the referral.

The pharmacokinetics and pharmacodynamics of antipsychotic drugs differ in women and men. Drug concentrations are dependent on the volume of distribution (Vd) and clearance (Cl). The parameters are influenced by gender-specific factors such as body build, diet, smoking status, concurrent medication, exercise, substance use and hormonal transition.7

Future research is needed to strengthen these findings and explore types and degree of assault leading to psychiatry ICU. We hope to explore course of inpatient admission; seclusion use; restraint use and to acquire data for the year 2016. 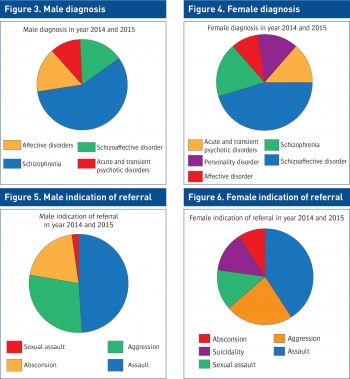 Limitations of the study

Notable limitations persist with the current study. Firstly, it is limited by the small sample size. Secondly, the current study does not have a control group and therefore there were no comparisons made to the findings. Furthermore, there was difficulty obtaining patient data as the method of compilation was not used through the electronic patient record system (EPR).

The authors concluded that the Phoenix Care Centre solely accepts patients who exhibit actual assaults in the form of physical or sexual, aggression and risk of absconding on the background of psychosis. The duration of stay as an inpatient in the centre depends on the patient’s response to antipsychotic therapy, which is generally within six weeks.

The authors wish to acknowledge the assistance of the Phoenix Care Centre and thank both Ray Farrelay, Kevin Tracey and Anne Marie in particular for their help.