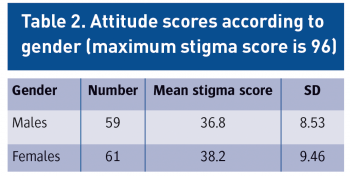 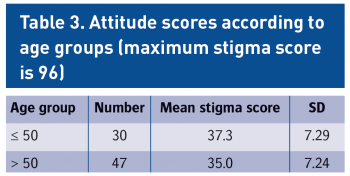 This survey showed that stigma score was significantly higher among medical students when compared with general practitioners.

This could be attributable to medical students being exposed to negative preconceived perceptions. As regards age and gender, the stigma score was not significantly different across categories.

Negative attitudes towards mental illness remains an integral part of our society. Our findings are important because they suggest that negative attitudes towards mental illness may begin at an early stage of training, and this is an area which needs to be targeted among medical students. Education and awareness is essential in this regard, and should be considered a key priority for psychiatry training among medical students. It may also be beneficial to focus on education among junior doctors throughout their training.

Future study should include surveys of specific specialties including allied health professionals and nursing staff, together with the surveying of psychiatry speciality doctors and nurses. Mental illness is a highly prevalent comorbidity across all medical specialties and reducing stigma early in career training could have much benefit to the medical profession.