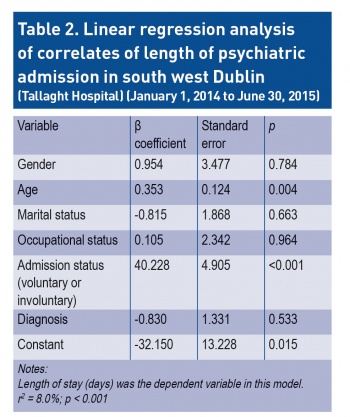 Longer duration of inpatient psychiatric admission in south west Dublin is independently associated with involuntary status and increased age, and is not independently associated with gender, marital status, occupational status or clinical diagnosis. While it is possible that certain diagnoses are associated with involuntary status, it is nonetheless notable that the collinearity diagnostics in this study indicate that no two variables (e.g. diagnosis and admission status) were so closely related to each other as to render their individual effects indistinguishable from each other.

Limitations include the fact that our research is based in a specific suburban area of south west Dublin, which reduces generalisability to other areas. Other limitations include the fact that we did not examine certain variables (eg. country of origin, insight, deprivation), which might well to relate to duration of admission.10 We also recorded only one diagnosis per patient (when some may have had two or more), and our final multivariable model had low predictive power (8.0%), limiting the conclusions that can be drawn from it. This might be attributable, at least in part, to the fact that we selected the independent variables for inclusion in our model based on both their possible relevance to length of stay and the fact that they were available from existing hospital data sources. Other variables (eg. number of previous admissions, forensic history, etc.) merit future study.

Despite the associations between longer duration of inpatient psychiatric stay and both involuntary status and increasing age identified in this study, most of the variance in length of stay (92%) remains unexplained by the factors examined in this study. This suggests that other variables yet to be identified play significant roles in determining duration of inpatient psychiatric admission.