The role of urodynamic studies

In patients who do not respond to treatment, urodynamic assessment may offer further information regarding their diagnosis. Urodynamic assessments include a variety of measures that evaluate urine flow, including flow rate, post-void residual urine, filling cystometry, bladder pressure and urethral pressure. Detrusor overactivity may be confirmed at urodynamics which can help direct more invasive treatment for OAB. Urodynamic studies should not be offered as first-line investigation but only after conservative treatment and medication has failed to achieve the desired result in uncomplicated OAB.

Botulinum toxin type A injection can be offered to women who fail medical treatment.7 The risks and benefits of treatment need to be explained to the women along with the likelihood of complete or partial symptom relief and the possibility of voiding dysfunction and increased risk of urinary tract infection. This should only be offered if the woman is willing in the event of developing a significant voiding dysfunction to either perform clean intermittent catheterisation or accept a temporary indwelling catheter. There is no data on long-term side-effects of botox treatment. Treatment needs to be repeated when symptoms reoccur.

PTNS has been shown to be useful in the treatment of OAB but is not widely available. It is an alternative, less invasive method of neuromodulation, which is therefore considerably cheaper. There are fewer published high-quality data supporting the use of PTNS and so it should only be offered after a multidisciplinary team review in women who have failed conservative therapy, including anticholinergic drug treatment, and who do not want botulinum toxin treatment or SNS.

Percutaneous sacral nerve stimulation is believed to work by electrically stimulating the sacral nerves which carry signals between the pelvic floor and the brain. The latest version of sacral neuromodulation allows a patient to operate a hand-held programmer to adjust therapy to achieve optimal outcome. Women need to be aware of the need for surgery, for test stimulation and the risk of failure, long-term commitment, the need for surgical revision and adverse effects.

For some patients, their OAB symptoms can be refractory to all the treatments outlined above. For these patients the treatment options are limited to major surgical procedures or long-term catheterisation. A detailed consideration of these is beyond the scope of this article, but after appropriate multidisciplinary review and detailed counselling, severely affected patients may be offered urinary diversion into an ileostomy or clam ileo-cystoplasty. Both are major and complex surgical procedures with significant short- and long-term morbidity and mortality (approximately 1% postoperative mortality rate).

Long-term indwelling urinary catheterisation is often overlooked as a simple and effective means of restoring continence. Complications do occur but these are usually symptomatic urinary tract infection and catheter-related complications, including encrustation and bypassing. However, for some patients an indwelling catheter (either urethral or suprapubic) can be an acceptable long-term solution.

Interstitial cystitis/bladder pain syndrome (IC/BPS) is defined as an unpleasant sensation (pain, pressure, discomfort) perceived to be related to the urinary bladder, associated with lower urinary tract symptoms of more than six weeks duration, in the absence of infection or other identifiable causes.12

Women between the ages of 40 and 60 years are most commonly affected. The condition occurs far more frequently in Caucasians and there is a 9:1 female predominance.13

Up to 50% of women experience spontaneous remissions unrelated to treatment, with a duration ranging from 1-80 months. Reported prevalence rates for this condition vary widely as there is no universally accepted definition. The pathophysiology of interstitial cystitis remains elusive and many theories have been formulated.

Pain typically occurs in the pelvic area and can manifest in the bladder, vagina, urethra, rectum or perineum. It can be sharp in nature but there can also be feelings of pressure or burning. It can also be related to sexual intercourse.

Basic assessment should include a careful history, physical examination and urinalysis to rule in symptoms that characterise IC/PBS and rule out other disorders (see Table 3). 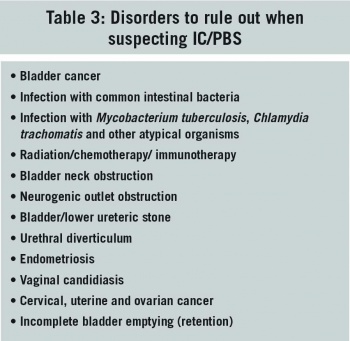 Baseline voiding symptoms using a frequency volume chart and measurement of post-void residuals as well as pain levels should be obtained in order to measure subsequent effects. Cystoscopy and/or urodynamics should only be considered as an aid to diagnosis in uncomplicated presentations.1

Conservative treatment is first-line management. Patients should be educated about normal bladder function and what is known and not known about IC/BPS, the benefits and risks of treatment, that no single treatment has been found to be suitable for all patients and that multiple approaches may be required to achieve symptom control.1  See Figure 1. 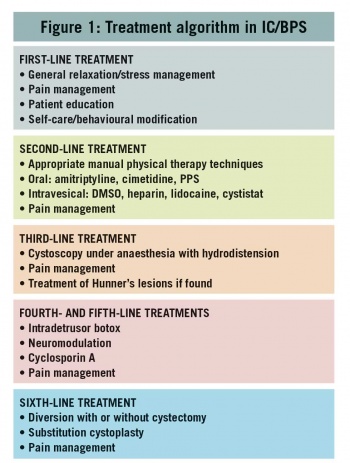 Initial treatment should depend on symptom severity as well as patient preference and clinical judgement. Ineffective treatments should be stopped after a reasonable period. Pain management should be continuously assessed because of its importance to quality of life. The ICS/BPS diagnosis should be reconsidered if no improvement occurs after a period of time.

Antihistamines have been shown to be useful for the symptomatic treatment of IC/BPS, possibly by preventing the release of histamines that can cause inflammation. An improvement should be seen within six to eight weeks of continuous use.

Amitriptyline is frequently used in pain management. Its safety and efficacy in women with interstitial cystitis showed significant change in the symptom score and improvement of pain and urgency intensity when compared with placebo.14

When to refer to a specialist

When medication has failed in a primary setting the following may then be considered:

Hyaluronic acid (Cystistat) temporarily replaces the deficient glycosaminoglycan (GAG) layer on the bladder wall, helping to relieve the pain, frequency and urgency of interstitial cystitis. For the first four weeks of treatment, women with interstitial cystitis receive one instillation each week. After that, treatments are usually given once a month until the symptoms resolve. Five or six instillations can be necessary before symptoms begin to resolve. Treatment can be repeated if symptoms return

Cystoscopy with hydrodistension is the most commonly performed intervention in women with IC/BPS. Hydrodistension is thought to work by disrupting the neuronal pathways of the bladder, thereby disrupting pain transmission. Treatment efficiency ranges from 12-70%. The benefits are, however, short-lived and it can cause ischaemia, damage and even bladder rupture.

Reconstructive surgery is considered where other treatments have failed, and symptom severity is such that the woman’s quality of life is seriously affected. Surgery is invasive and irreversible and there is no guarantee that the symptoms will improve. Some can, in fact, become worse. Potential complications from surgical procedures also need to be considered. Options available include partial cystectomy, augmentation cystoplasty and urinary diversion with or without cystectomy.

Approximately 60% of women will experience symptomatic acute bacterial cystitis in their lifetime; 20-40% of these will experience a further episode and 25-50% will experience multiple episodes.15  Women with an uncomplicated UTI have no known risk factors that would make them more susceptible to developing a UTI. Women with complicated UTI have higher risk for developing a UTI and a greater chance of not responding to treatment. These risk factors include anatomic or functioning abnormality of the urinary tract such as stones or diverticulum, suffering from an immunocompromised condition or infection by a multidrug resistant organism. UTI usually refers to culture-proven acute bacterial cystitis. Women are predisposed to developing UTIs due to a short urethra. Intercourse assists bacteria in ascending into the bladder. Constipation also increases the likelihood of developing UTIs.

In young women, an acute UTI usually presents with dysuria associated with urinary urgency, frequency and sometimes suprapubic pain, haematuria or worsening incontinence. Acute dysuria is a highly specific symptom with 90% accuracy for UTI.16 In older women, symptoms of UTI may be less clear but acute dysuria as well as the above symptoms remain reliable for diagnosis.

For a diagnosis of a UTI, there should be symptoms plus laboratory culture of a urinary pathogen. The most common bacteria is E coli (75-97%) followed by Enterobacteriaceae, P mirabilis, K pneumoniae and S saprophyticus.

The definition of clinically significant bacteria was described more than 60 years ago and was based on an arbitrary cut-off aimed at reducing overtreatment of asymptomatic patients. The cut-off of 105 colony-forming units (CFU)/ml may not identify women who are symptomatic of a UTI. In women who are symptomatic, studies have shown that they may culture bacteria as low as 102CFU/ml.17 Hence, clinical symptoms in the absence of laboratory-proven culture is enough to warrant treatment for UTI in women.

In women with recurrent UTIs, a complete history and pelvic exam should be carried out. Repeat samples may need to be taken and consideration for the need to obtain a catheter sample should be given. Asymptomatic bacteriuria, which is the presence of bacteria in the urine in the absence of symptoms or illness, does not need to be treated in women with no other risk factors.

Women should be advised to wipe from front to back to avoid introducing bacteria into the urethra. They are also advised not to hold onto urine for more than three to four hours and to empty directly after sexual intercourse and avoid getting dehydrated.18 Some women may find it useful to avoid taking baths, using cotton underwear and keeping underwear off at nighttime.

The choice of antibiotic use depends on local sensitivities. The HSE guidelines for treatment for acute uncomplicated UTIs in adults are shown in Table 4.

From a clinical perspective, doctors may offer patient-initiated treatment to select women while awaiting culture sensitivities. After discussion of the risks and benefits, doctors may prescribe antibiotic prophylaxis to decrease the risk of future UTIs in women of all ages previously diagnosed with UTIs (see Table 5).16

Although the evidence is not robust, some women find cranberry prophylaxis useful in the management of recurrent UTIs. There is sufficient evidence to recommend vaginal oestrogen, topical or tablet form to peri- and post-menopausal women with recurrent UTIs where there is no contraindication to oestrogen therapy.15

When to refer to a specialist

Specialist referral is recommended where complicated UTIs occur as mentioned above. Cystoscopy and upper tract imaging should not be routinely carried out in uncomplicated patients but may be necessary in those with a higher index of suspicion of abnormalities. Women who are initially treated for an uncomplicated UTI who recur rapidly such as within two weeks, may also require imaging or cystoscopy.